My name is Matea Glavinić, I study Croatian language and literature and history at the Faculty of Philosophy at the University of Juraj Dobrila in Pula. Thinking about student exchange and exchanging experiences at another faculty in another country, I waited for the right opportunity and welcomed it last year when the University of Pula established cooperation with the University of Pyatigorsk. And so begins an unforgettable experience...

Once upon a time on Caucasus

With the twentieth year of the twenty-first century I set out for the North Caucasus. Enough big of a Russian center to satisfy the need for Russian language, culture and rich Russian cuisine, and yet intercultural enough to see how they breathe on the other side of the Caucasus.

In Greek mythology, the Caucasus was one of the pillars that supported the world, and today we can say that it supports Russia, its southern part. Geographically, the Caucasus is located between the Black Sea and the Caspian Sea. On the street you can meet Russians, Azerbaijanis, Georgians, Armenians, Ossetians and other smaller ethnic groups, you can hear a dozen languages and very easily live to be a hundred. Namely, almost 50 % of all inhabitants of the planet who have reached 100 and more years live here. Mineral healing waters from local springs certainly contribute to this, and they have neutral and sulfurous waters (read: disgusting and smelly). The most popular is certainly narzan – water of heroes.

The city where I live and study, Pyatigorsk, is located at the foot of about fifteen mountains. It takes me about ten minutes to walk to the nearest and dearest. Her name is Mashuk. According to the legend, Mashuk was young and attractive, so young Tau and his father, old Elbrus (the highest peak in Europe who is eagerly waiting for me to conquer him) fell in love with her. The beautiful blossoming Mashuk selflessly reciprocated Tau's love, which angered Elbrus, so he challenged his son to a battle in which he split him into five parts and scattered his friends throughout the Caucasus. Since then, Tau has been known as the five-headed or Beshtau (from Turkic beş 'five' and tau 'mountain'; Pyatigorsk after the Russian term Pyatigorye 'area of five mountains'). As the town itself is located in the valley, the outlines of the mountains can be seen from every street in the distance, and the most beautiful is certainly the view of Beshtau, 1400 m high, and not so often, but amazing view of the eternally snowy Elbrus (5640 m).

Here babushkas live for their street cats, run a big business in front of a building with coriander and dill (without which Russian cuisine is unthinkable), young people cultivate a slav style, eat cheburek and drink vodka and kvas. Alcohol is not sold at night and on holidays, and Women's Day and Men's Day are also non-working days. Victory Day is probably a bigger holiday than Easter, when the Russian flag flutters in a special rhythm, war songs are sung and heroes are celebrated, and Pushkin is also incredibly important in this whole Russian story.

Pyatigorsk boasts an excellent university (PSU), rich nature, incredibly blue lakes, natural pools with healing water, changeable weather (they say that the weather here is as a woman's character, a bit of snow, a bit of sun), Lenin in various stone forms, Soviet symbols, parks dedicated to the Great Victory, the duel of Lermontov in the 19th century and visits great Russian names like Tolstoy, Yesenin and Mayakovsky. It is no secret that many writers drew inspiration from the miraculous and mysterious Caucasus, here the best works were created and the greatest loves met.

I would recommend to all those interested in the Russian language and culture to realize their Erasmus in Pyatigorsk, at Pyatigorsk State University where the professors are full of knowledge and experience, friendly and kind. They provide each student with an incredibly interesting experience to remember for a lifetime.

Until my very own lyrics, for which I most certainly don't lack of inspiration, I will end my review of my Russian Erasmus experience with the verses of Lermontov, who spent his days in Pyatigorsk two centuries ago and wrote about the Caucasus mountains: 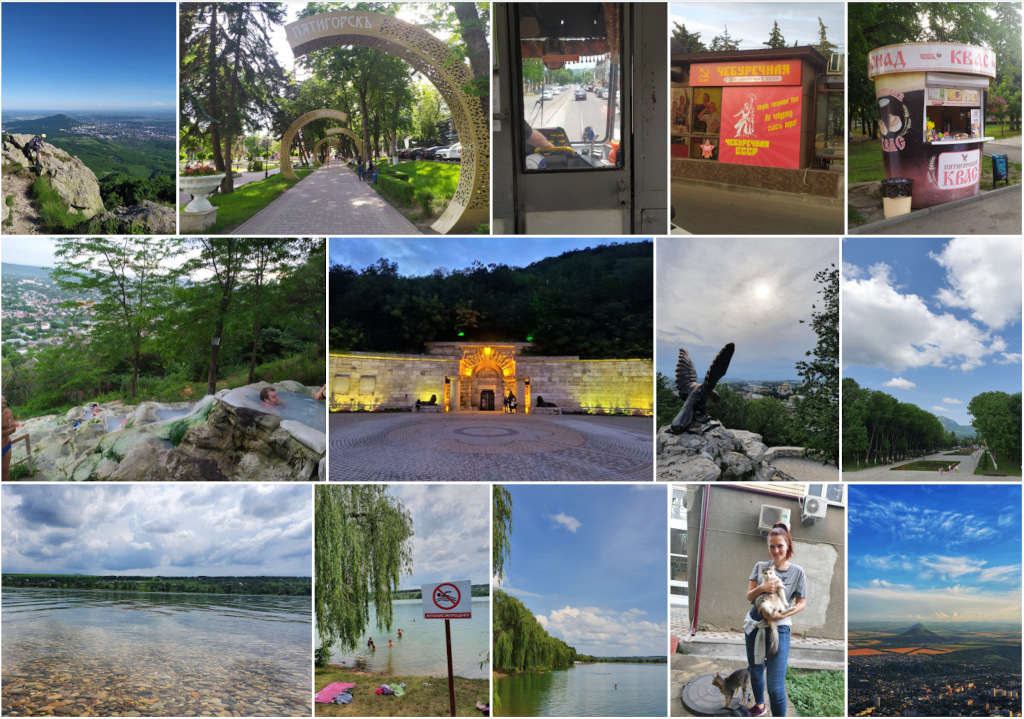 Check all photos in the photo gallery from Pyatigorsk!