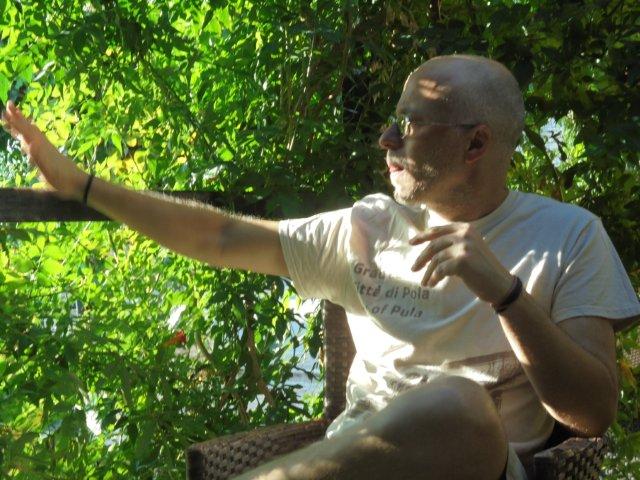 Born in Pula, Croatia, in 1970. B.A. in English and indology. Croatian lecturer at the University of New Delhi in 1997/8, then free-lance writer, teacher and translator. Ph.D. in theory and history of literature (A Jungian Interpretation of E. M. Forster's A Passage to India: Indian and Western Visions of the Ego, Soul, Self). Assistant Professor at Juraj Dobrila University of Pula. His scholarly interests include myth and archetypal criticism, relations between literary and non-literary realities, and traditional literary theories and practices, with a particular accent on India. Besides scholarly papers published at home and abroad, to his credit are over twenty books and dozens of other texts translated from English, Italian, German, French, Hindi and Sanskrit, many of which he has provided with a preface and notes. To his credit is The Occidentocentric Fallacy: Turning Literature into a Province (Cambridge, 2018), dealing with problems in establishing world literature as such. He has also written a number of lexicographic units covering Indian literature. As poet, fiction writer and essayist, he has published six books, besides many texts in various magazines and on the radio. He has been awarded for his literary and translation work, both at home and internationally, and has himself been translated into several languages.

The Occidentocentric Fallacy: Turning Literature into a Province

Language, myth and magic in "Orationes magicae" by father Eduardus

Occidentocentric Fallacy: Downsizing the World, or Keeping the Otherness of the Other

READING W. BLAKE'S "THE CLOD & THE PEBBLE" AS INTRODUCTION TO BLAKE, AND TO POETRY

Tagore and Literature as a World of Its Own

Genetic fallacy: the poet's works and days, instead of poetry

Dylan Thomas: Towards the Beginning

'Tagore Syndrome': A Case Study of the West's Intercultural (Mis)readings

Northrop Frye, The faces and shadows of practical criticism

Apocalypse Now and the Bhagavata Purana: the End of the World as We Hardly Know It

Nātyaśāstra: Art as Play of and for the Gods

Translation vs. Cislation: Should the Reader Be Pampered or Challenged?

Two or Three Things I Know of Film

Radoslav Katičić, Hostess at the Door

The Nāṭyaśāstra: Art as Play of and for the Gods

Apocalypse Now and the Bhagavata Purana: the End of the World as We Hardly Know It

Natyasastra: Introduction to a Multiplicity of Realities

Translation vs. Cislation: Should the Reader Be Pampered or Challenged?

'Tagore Syndrome ': A Case Study of the West's Intercultural (Mis)readings

A Jungian Interpretation of E. M. Forster's Novel A Passage to India: Indian and Western Imaging of the Ego, the Soul, and the Self

Postmodern Colonialism in Humanities, or Keeping the Otherness of the Other

Chaotic Howl or Primordial Vibration: Duplicity of Sound as Suggested by Forster's A Passage to India

From Classical Sanskrit Literature to Bollywood: Modernity and Traditionality of Eroticism in Indian Commercial Cinema

Jung and Literature: Revisiting the Extrinsic in Literary Criticism

Occidentocentrism as a Chronic Disease of Western 'Universalism'

How to Make a Good Film

How Did I. G. Kovačić Translate English Poetry, as Exemplified by Four Poets

The Splendor of Ancient Egyptian Cosmo- and Theogony: Igor Uranić, The Land of Osiris: Egyptian Mythology and Its Western Echoes

Liberating the Man Spiritual: Nikolai Berdyaev, The Meaning of History

The Essay and Its Chances

Putting It Poetically-Philosophically and Confessionally: Béla Hamvas, the Hungarian Hyperion

On the Slavs of Istria

Ananda Coomaraswamy and His View of Art

What Is Kurtz to Marlow?

Istria: A Guide through Its History and Arts

Salman Rushdie at a Crossroads of Realities

The Evil Worlds of William Blake